USB-C works great, but the iPhone wants a future without ports

USB-C works great, but the iPhone wants a future without ports

Following the 3.5mm headphone jack, Apple is preparing to replace another port for the iPhone this year. The difference from the previous one is that this time the replacement is not on the iPhone body, but on the interface of the supporting charger.

As I said 2 years ago, this year's new iPhone will start to use the USB-C interface charger, and the matching power cord will also be replaced with Lightning to USB-C.

The earliest exposure of relevant news was the domestic charging head network. It exposed a design sketch of a new iPhone charger in early May. After that, the foreign ChargerLab also gave a set of pictures of the European version, although there are appearances. There are regional differences, but both are equipped with a USB-C charging interface and are expected to support the USB-PD fast charging protocol up to 18W.

At present, the credibility of this news is still quite high. Now on Apple's official website, you can also buy Lightning to USB-C cables separately, as well as USB-C chargers that support iPhone and iPad fast charging; but in the future, they may appear in the package as iPhone's own accessories inside the box.

On the first-generation iPhone launched in 2007, Apple used a 30-pin interface, which is also the interface used by later iPod products. impression.

In 2012, Apple used the 8-pin Lightning dedicated interface for the first time on the iPhone 5. In addition to the substantial reduction in size, its positive and negative pluggable characteristics also made it significantly better than the USB-A and micro- USB interface, and the interface specification agreement of USB-C was not completed until 2014.

If Apple really intends to switch to USB-C chargers in 2018, this may also be the third time Apple has made changes to its companion interface since the launch of the iPhone.

As for the advantages of switching to the USB-C interface, I believe everyone has known it before. In fact, the most important things are the following two points:

1>Front and back pluggable design: Compared with USB-A and micro-USB, the USB-C interface does not distinguish between the positive and negative ports, and the usage habits are very similar to the Lightning interface of the current iPhone

2>Enjoy faster transfer rates: This includes not only the data layer, but also the charging speed, so as mentioned earlier, the new interface will greatly reduce the charging time of the iPhone

Of course, some people will also say that since the USB-A has been replaced, why not replace the outdated Lightning that has been used for 6 years with the USB-C interface, and make a C to C data cable, both ends are arbitrary Use, isn't it beautiful?

This matter is not complicated in nature, but there are many reasons behind it. Users need to accept a period of pain when changing cables. In fact, every time Apple changes the interface of its own device, it will cause Not a small controversy. After all, that means you can't use the data cables you bought in the past, and you have to pay an extra wallet for various adapters. 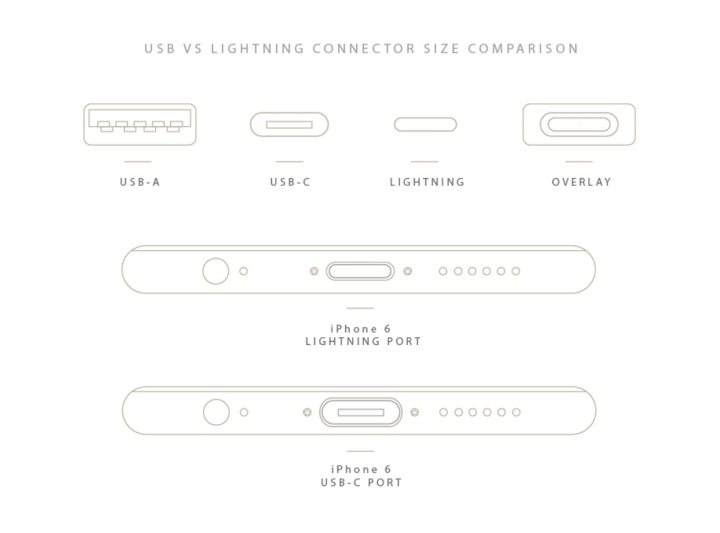 Of course, in terms of product structure, if you compare the volumes of these two interfaces, you will find that Lightning is slightly smaller than USB-C, which may be one of the reasons why Apple is reluctant to give up Lightning.

Another argument is from a commercial point of view. At present, the data cable connected to the iOS device is still inseparable from the MFi (Made for iPhone/iPod/iPad) certification and authorization. Apple will charge the authorized manufacturer a specific fee to ensure the safety and quality of the accessories.

In this mode, Apple can earn hundreds of millions of dollars in revenue every year, and more importantly, the control of the Lightning interface, which is equivalent to Apple's ability to control the data and information connected to its own mobile devices such as the iPhone.

To sum up, Lightning to USB-C is probably a compromise solution. Although Lightning has not kept up with the times, Apple can still ensure that the end of the iPhone is its own, and at the same time meet the new standards and make Maximum fit.

After all, the other end of the power cord, the USB-A interface, may be the first target Apple wants to eliminate now. Considering that the new batch of MacBook series has abandoned USB-A across the board, and Apple has also reduced the price of a batch of interface converters, so even for the sake of its core iPhone users, Apple has found a way to eliminate mobile devices. Best reason to go with a Type A connector.

Including other mobile phone and accessory manufacturers, it is the same. I believe that under the leadership of Apple, the USB-C interface will not only stay on one end of the power cord, but will gradually expand to the ports of chargers, mobile power supplies and PCs, so that the More third-party peripheral accessories completely abandon the dependence on the USB-A interface.

However, for Apple, the use of USB-C charging interface may only be a transitional solution. From the cancellation of the 3.5mm interface to the reduction of the MacBook interface, to the Apple Watch and last year’s iPhone’s support for wireless charging, as well as the successive releases of AirPods headphones, AirPower wireless charging pads in the past two years, and even the upgrade of AirPlay technology, more or more Less has reflected Apple's direction in the field of transport.

In addition, in October last year, Apple also acquired PowerbyProxi, a company specializing in providing wireless charging solutions. As Apple Senior Vice President Dan Riccio said: "Apple wants to create a wireless future." It is not difficult for us to understand that Apple really wants to things to do. In fact, you can also see that Apple has built a mature cloud synchronization and wireless data transmission system in iOS, and wireless at the physical level is Apple's current goal.

Under this goal, all interfaces will only be eliminated in the future.

Therefore, instead of replacing Lightning with USB-C and enduring the pain period of two or three years, it is better to directly transition to a truly "wireless iPhone" in one step. Considering that Apple has already tried similar solutions, it is not Something out of reach.

Of course, in terms of the current user habits, this process is not completely free of cost. After all, this is a problem that cannot be compromised by switching the interface, but a process of "from existence to nothing", which is separated from the wire. The connection, the transfer of information and data is completely illusory.

Just imagine, what embarrassing things would you encounter if the phone interface on your hand was gone now? For example, how to solve the problem of mobile charging when going out? Can Apple guarantee an accessory for wireless charging in the box for the same cost? If the "power anxiety" can still be saved by a mobile power supply in the past, then holding an iPhone with no interface at all, you can't guarantee that it will be completely better than the current wired interface in terms of charging.

Therefore, if Apple really wants to cut off all the interfaces on the iPhone, it has to give a solution as good as AirPods, just like cutting off the 3.5mm interface in the past, forcing users to accept and enjoy the benefits brought by wireless connection. benefit. Although this still cannot convince everyone, as long as it is convenient and easy to use, it can still attract some recognition and applause.